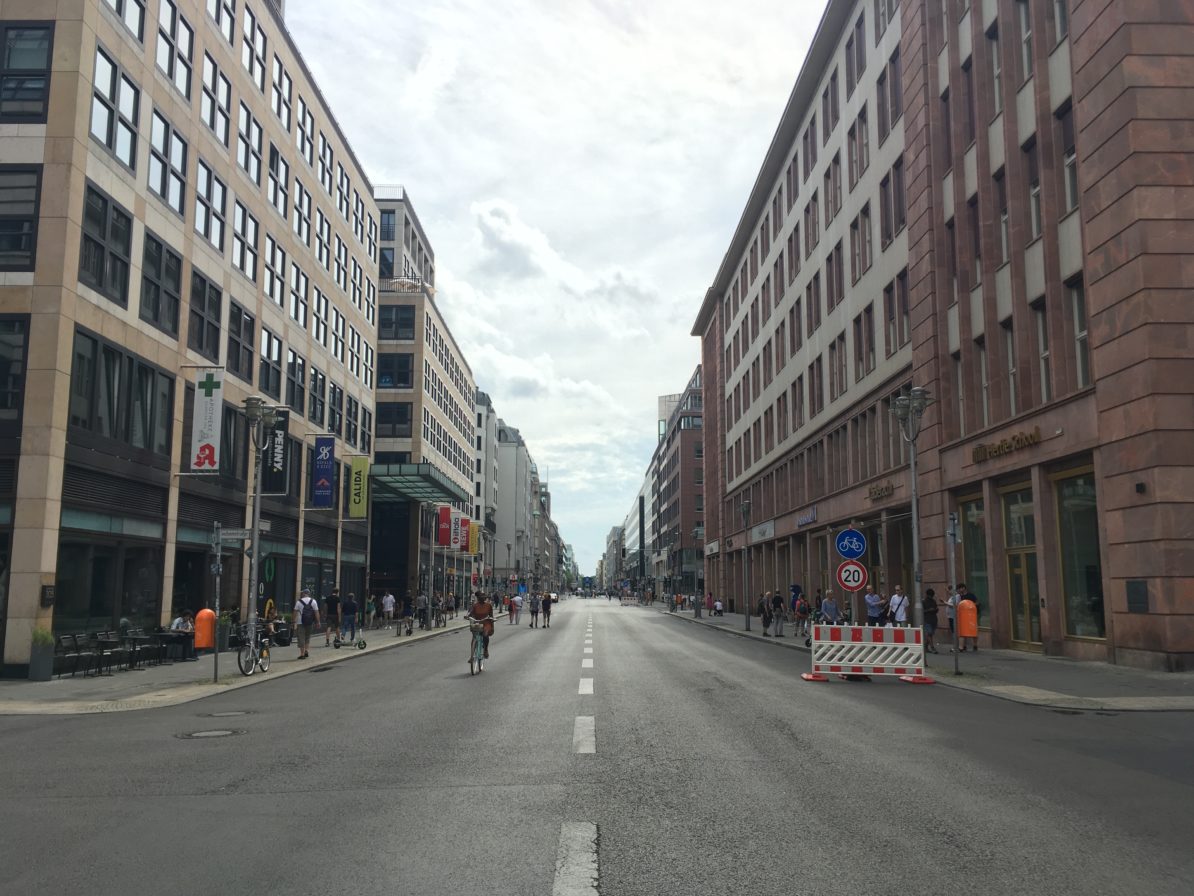 Berlin’s Friedrichstrasse was once praised and disdained as a symbol of modern metropolitan life. Today, it might partly regain its former status, as the street is part of an ongoing experiment about revitalizing urban space.

“The spirit of Friedrichstrasse has rubbed off on the whole city,” German philosopher Martin Heidegger once wrote home to his wife Elfride, whom he addresses in his letters as “Mein liebes Seelchen!”—”My dear little soul!” “People here have lost their soul,” he continued his rant about the German Empire’s capital, which he visited while stationed in nearby Charlottenburg during the last months of World War I.

“I would not have thought this possible: such an air of artificially overbred, most vulgar, and cunning sexuality—but I’m beginning to understand Berlin better now.” This is how young Heidegger comes to terms with his culture shock in the big city. “In such an environment,” Heidegger assures his wife, “true intellectual culture is impossible—a priori impossible.” And yet, the “knickerbocker philistine” or “Pumphosenspiesser”, as Thomas Bernhard once called Heidegger, had to take a detour through Friedrichstrasse on his way to becoming the philosopher of Being.

Heidegger was not the first to view Friedrichstrasse as the epitome of modern Berlin. The north-south axis running right through the center of the fast-growing capital had been described as a symbol of metropolitan life at least since the turn of the century. It was widely known as a wellspring of pulsating urban life, of commerce and prostitution, gleaming with luminous advertisements and resounding the rhythms of modern life.

The street maintained its glorious notoriety until the Nazis seized power in 1933. It is from this year that we have another noteworthy mention of Friedrichstrasse, which has a quality quite different from Heidegger’s letter to his wife. The street, it says there, “must seem like the axis of the world” in the eyes of an engine driver who looks down onto Friedrichstrasse from the railroad station right above it. After a long “journey on which everything but earth and sky has fled from him,” the driver and his locomotive have finally arrived for “a sojourn at the very center of life.”

These lines originate from the pen of the writer and cultural critic Siegfried Kracauer. They were published under the title “Lokomotive über der Friedrichstraße” (English “Locomotive over Friedrichstrasse”) in the newspaper Frankfurter Zeitung, on January 28, 1933, two days before Adolf Hitler was appointed Chancellor of the Reich.

Kracauer’s text is an ode to Friedrichstrasse and an ode to a modern, vibrant metropolis. From the perspective of a virtually invisible observer, Kracauer extolls the street as a utopian place: “It looms out of the distance, enfolding rich and poor, harlots and escorts, and lines the facades with a roof-high, tumultuous blaze of words and signs. The man feels as if he were invisible, with the street of streets surging over and past him, a chain that never breaks, a human ribbon that ceaselessly unrolls, through the flickering air, between one plowed field and the next.”

Today, Kracauer’s version of Friedrichstrasse must appear like a utopian vision, a street in the Berlin of a future that ended before it truly began. The Nazi regime certainly put an end to this future, and the destruction of the war put the final nail in its coffin. Afterward, no engine driver would have recognized the street on the base of Kracauer’s description. And when the Cold War further lowered the temperature of Berlin’s inner-city life, the old north-south axis turned into a symbol of the East-West divide. To this day, Checkpoint Charlie is what most visitors are looking for when they head down Friedrichstrasse.

Now, temperatures are rising across the globe, and once again Friedrichstrasse might be setting the tone and direction for the city, and perhaps for metropolises around the world. This time, however, it is not doing it by dint of noise and speed, but by virtue of slowdown and calm. Since Friday, August 21, a section of Friedrichstrasse has been closed for motorized traffic. During a five-month test period, the city will use the time until the end of January 2021 to evaluate how such a change will help reduce pollution, stimulate local businesses, and generally revitalize this part of the city.

This is a time when more than half of the world’s population lives in urban areas—with a rising trend; cities worldwide are increasingly jammed and polluted, and the numbers of traffic casualties in Berlin reach record highs. Against this backdrop, we can only hope that this time around the spirit of Friedrichstraße will really rub off on the whole city, no, on all cities of the world.

This, of course, wouldn’t prove a “knickerbocker philistine” like Martin Heidegger right, quite the opposite. In fact, Kracauer was right. A vibrant metropolis animates people, it invests them with soul—provided that they can move around in it freely and safely.

—
Martin Heidegger and Gertrud Heidegger: “Mein liebes Seelchen!” Briefe Martin Heideggers an seine Frau Elfride 1915–1970. München: Deutsche Verlags-Anstalt, 2005. (The quotes are from a letter of July 21, 1918, p. 71–3—the English translations are mine.)