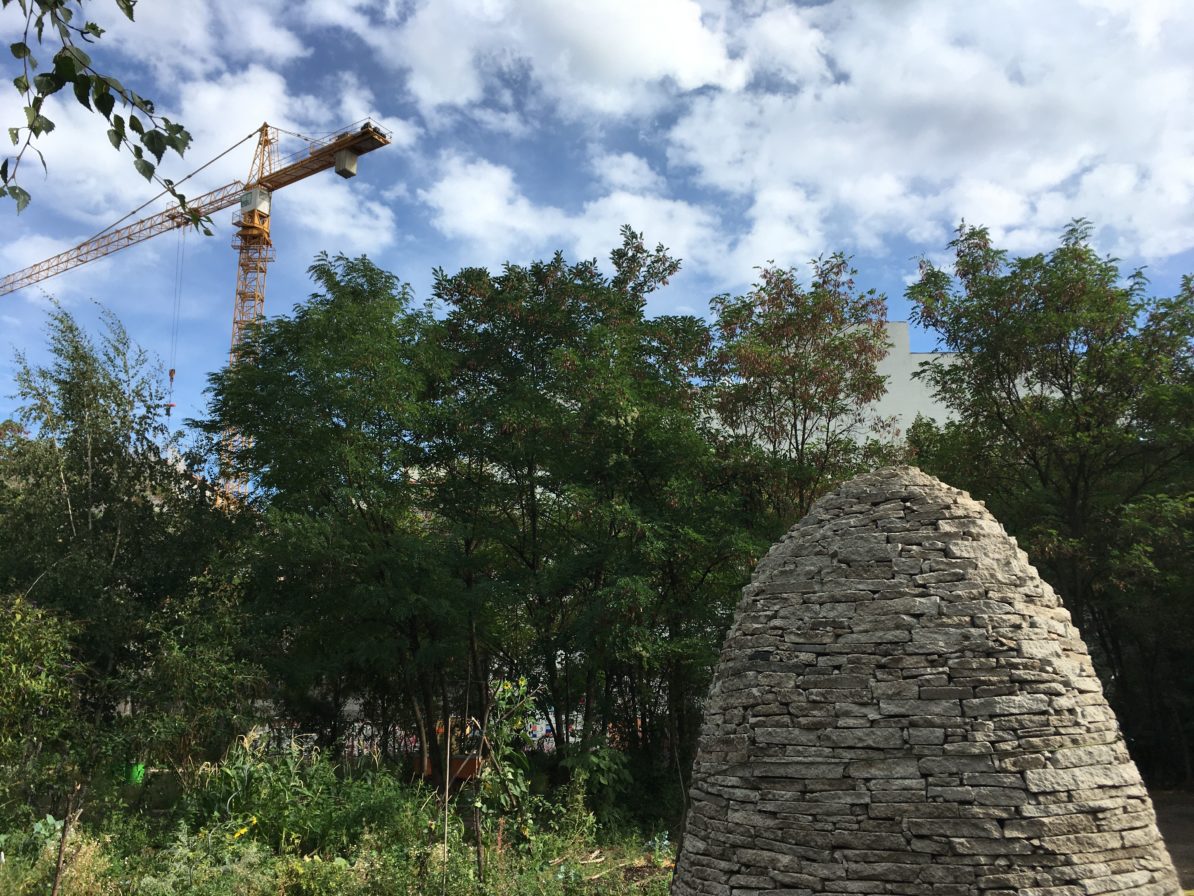 Where I’m from, you learn what borders are from an early age. The fence separating my own little world from the neighbors’ garden was a demarcation line toward enemy territory. Neighbors’ disputes were said to be the germ cell of war. And plucking low-hanging fruit from a branch of your neighbor’s apple tree, I was taught, was the one-way entry point to a life of crime. Where I’m from, the petty-bourgeois values of domestic peace, property protection, and Sunday-mow-day were not to mess with.

A sense of humor is an effective remedy to the boredom of lawn-mower melancholia.

To be sure, my parents were different. They had our grass grow to a length widely frowned-upon in the neighborhood, they let us kids jump fences and fetch forbidden fruit, and they taught us a sense of humor as an effective remedy to the boredom of lawn-mower melancholia and hedge trimmer-induced claustrophobia. The fact that our garden looked different, more overgrown, than those of our neighbors was like shouting out into the world: “Yes, we are different—and we are proud of it!”

Gardens have always been markers of distinction, model playgrounds, sandboxes to try out, and act out, notions of superiority, social status, us-versus-them, hither-versus-thither. Thus far, my parents played along, albeit by their own rules and with their own ideas of status and identity. But thanks to them, I also had an inkling early on, that gardens stood for much more than that. Our garden was the place where we welcomed our friends, where we gathered around campfires, where we got to know the enjoyments as well as the perils of nature. Luckily, the fragrant flowers were at the front, right near our terrace, and the poisonous berries grew in the back where the fence was. Our garden was a space where we learned what it could mean to live a convivial and respectful life on planet earth.

The imaginaries of the Hanging Gardens of Semiramis and the Garden of Eden went together pretty well.

From my parents, I also learned that—in the grand scheme of things—our garden was little more than a prosaic imitation of historic and mythological ideals. With a tremor in his voice, our dad told us about the Hanging Gardens of Semiramis, listed among the Seven Wonders of the Ancient World. My mom, at the same time, shared with us her Roman Catholic heritage, telling stories about Paradise, the Garden of Eden. Although my dad was a militant atheist, the two garden imaginaries went together pretty well. They both insinuated that far away from where we lived and certainly far beyond our neighbors’ gardens, there might be a better, more blissful place. In my childhood imagination, the biblical and mythological gardens were quite alive and real, even if in fact they were mere phantasies of a faraway past or empty promises of a happier life in the hereafter.

Cultural history abounds with horticultural imaginaries and representations. In Christian iconography, the ‘hortus conclusus,’ the enclosed garden, is a common backdrop in depictions of Mary with the child. This association may have been obvious to contemporaries since both the Latin word ‘hortus’ and the Greek word κῆπος (garden, orchard) were also used to refer to ‘pudenda muliebria‘ or the female genitalia, and hence, when enclosed, to represent their untouched purity. A Gallo-Romance translation of this expression, ‘hortus gardīnus,’ appears to have been the root of the French word ‘jardin,’ as well as English ‘garden’ and German ‘Garten.’ (Merriam-Webster). Does this mean that in Western culture, gardens were actually for the longest time conceived of as enclosed, restricted, perhaps even sacred places?

Monastic gardens were an institutionalized, plant-based version of Noah’s Ark.

Monastic gardens are particularly interesting examples, as they bear various levels of cultural meaning. Firstly, they were perceived as a concrete representation of the garden of Eden. Secondly, they were an institutionalized, plant-based version of Noah’s Ark. And finally, they served the rather practical purpose of providing some basic produce and medicinal plants to the monastic community, which otherwise depended on the fruits of the surrounding lands.

Modern cities may have been inspired by this latter, practical function of monastic gardens during the nineteenth and twentieth centuries. Allotment gardens enabled the working class to partly sustain themselves in times of industrialization, rapid urban growth, and breakdowns of the agricultural supply chain during and in the aftermath of wars. But there’s a lot more that the cities of the twenty-first century can learn from the cultural history of gardens.

Berlin has a vibrant and growing culture of urban and community gardening projects.

Berlin, the city where I live now, is blessed not only with a stunning botanical garden, numerous public parks, and plenty of allotment colonies. It also has a vibrant and growing culture of urban and community gardening projects. The most famous one of these projects is Prinzessinnengärten at Moritzplatz in Kreuzberg. Here, residents have developed largely mobile forms of urban agriculture on an unused plot of land since 2009. The garden is open to the public and welcomes active contribution from horticulturally interested and agriculturally skilled city dwellers. The project soon received international attention and it was presented at the Expo in Shanghai in 2010 and awarded with the Utopia Award in the same year (Zeit Online).

In spite of its early fame, the project has existed under precarious circumstances from the start, which is part of the reason why the gardeners have kept all their plants in mobile containers, ready to move elsewhere at any time. In 2012, three years after its inception, the project’s existence was threatened by the city’s plans to sell out the land to private investors. This endeavor was stopped by a tremendous public outcry, an open letter to the city council (Senat), and a petition to keep the land in public ownership (Prinzessinnengärten). In 2019, the lease that the project had signed with the district was about to run out and the funding of the project was jeopardized. The gardeners had already dismantled the shacks housing the garden restaurant, when, like a miracle, the city government turned things around and granted the project a future for two years.

If Wikipedia is right, a single feature common to all gardens “even the wildest wild garden is control.” As I have shown, Western culture has a long and strong tradition of associating gardens with social exclusion and spatial demarcation. However, there’s also an inclusive, convivial, nourishing, and utopian dimension of horticulture, even if this side of the garden may have long been neglected. In a world that is increasingly defined by urban ways of living, it is up to us what kind of gardens we will include in the fabric of our cities: those which separate and exclude, or those which nourish and bring us together.

The picture shows the Prinzessinnengärten at Moritzplatz, Berlin-Kreuzberg, in August 2020.