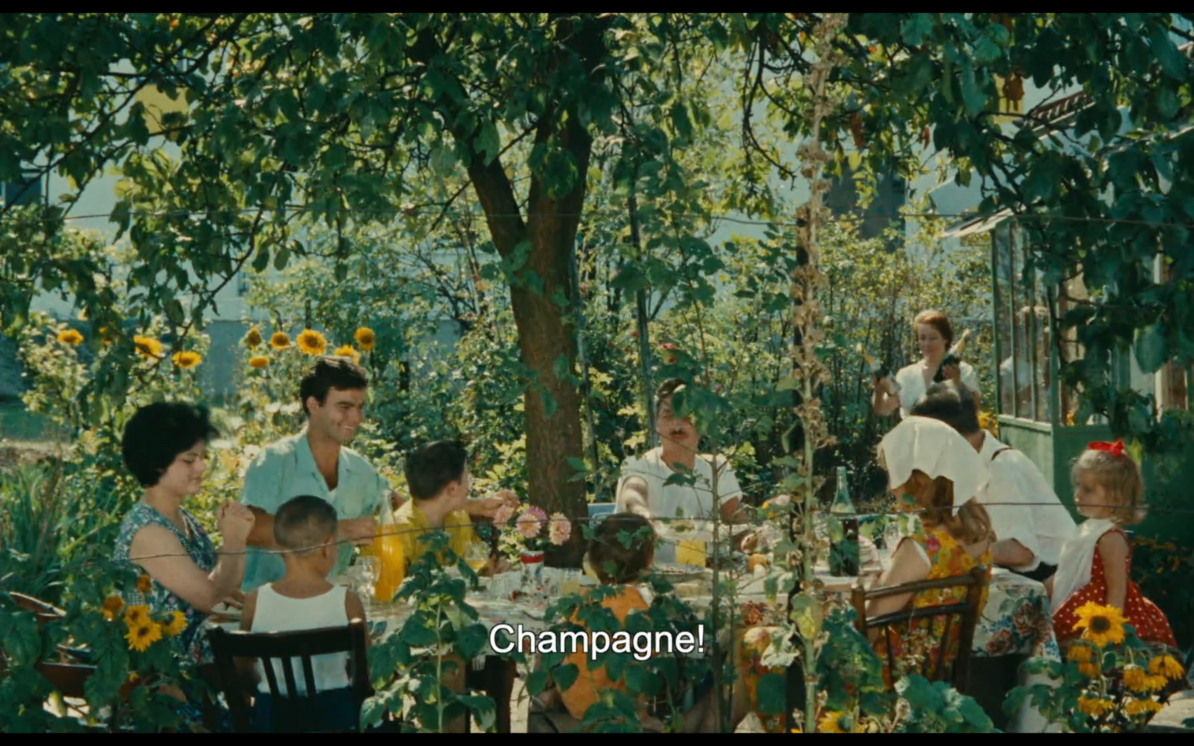 Sometimes you have to cross a line to find true happiness. Sometimes, crossing a line takes you from happiness to hell. If only it were so clear in which direction you are crossing. Life isn’t always signposted that well, and sometimes the signs to happiness and those to hell point in the same direction. Agnes Varda’s film Le Bonheur (1965, English Happiness) gaily depicts such a journey with an ambiguous orientation. Does the film come with a happy ending? I wouldn’t tell you if I could.

Le Bonheur is a cinematic masterpiece in dazzling colors.

Here’s what I can tell you without spoiling for you what comes as a great joy to many viewers and as an even greater shock to some: Le Bonheur is a cinematic masterpiece in dazzling colors. It tells the story of a young carpenter, François, who lives with his wife Thérèse—a seamstress—and their two little children in a then still rural suburb of Paris (Fontenay-aux-Roses). On his errands to the nearby town Vincennes he falls in love with the young Émilie, who works at the local post office. Although François admits to her that he is a happy husband and father, the two quickly start an affair. When Thérèse notices that François is even happier than usual, he confesses his involvement with Émilie and begs his wife to accept that he loves both women in equal measure but in very different ways.

While the film’s storyline is straightforward and simple, its aesthetical execution is sophisticated and mind-blowing. Le Bonheur is the definition of painterly. Every single shot is composed like a painting, in carefully matched colors, smooth but saturated, and often with stark contrasts. The film’s exuberant play of colors left a lasting impression on me when I first watched it some fifteen years ago. Although the colors were still fresh in my memory, I was deeply impressed once again when I watched Le Bonheur for the second time a few days ago. In the meantime, the film had been carefully digitized and restored in 2014 (50 years after its creation)—and the color grading was supervised by Agnès Varda.

Varda inscribed herself into a long lineage of visual art on this motif, notably of impressionist painting.

In a short TV interview about her film (ARTE, 1998), Varda states that she was inspired by the idea of a picnic in nature. Thus, the French New Wave director inscribed herself into a long lineage of visual art on this motif, notably of impressionist painting. Édouard Manet’s Le Déjeuner sur l’herbe comes to mind, as well as Paul-Auguste Renoir’s various picnic and luncheon paintings. A more recent reference is Jean Renoir’s 1959 satirical movie Picnic on the Grass (Le Déjeuner sur l’herbe), which took more than just the title from Manet’s painting and is greatly indebted to the works of Paul-Auguste, who was the director’s father. Varda explicitly cites Renoir’s film early on in Le Bonheur by playing a sequence of it on a TV screen in François’s uncle’s house.

In keeping with the impressionist tradition, Le Bonheur draws much of its power from those aspects of reality that it largely omits from its overflowing images—apart from a few subtle hints. As simple as its storyline may seem, the film’s intrigue is driven by mystery and by everything that is not said, done, or shown. As a case in point, the protagonist’s notion of happiness resides within an intact world, revolving around the domestic bliss of the stereotypical nuclear family, plus a pinch of romantic adventure. We can only assume that the existence of this idyll relies largely on a state of prosperity and peace that can neither be taken for granted nor did it come gratuitously.

The society shown in Le Bonheur appears to be very homogenous and self-contained. But this seemingly ideal world has its cracks and its less-than-ideal flipside, which Varda introduces to her well-composed images by dint of subtle hints. The children play cowboys and native Americans while their father jokes “red skin, red pepper.” When François drives to Vincennes for the second time, a shot of two lions from the local zoo flashes up very briefly—almost like subliminal images. These hints of a less harmless world somewhere out there serve as reality effects in an otherwise saccharine utopia. They serve as reminders that the society the characters live in relies on a culture of colonizing other people and dominating nature.

In this way, every element in Varda’s film tells a little story, which serves to dismantle the cliché-like quality of the overarching narrative. In this way, too, Le Bonheur functions more like a work of visual art than of literature. But not only is the film composed like a painting in every single one of its frames; as a whole, it is also composed like a musical piece, both in a metaphorical and in a literal way.

The single scenes and sequences are jointed together by color fades, with themes and motifs recurring in variations; and the soundtrack, largely consisting of two pieces by Mozart, is much more than just a musical background. The classical music demands a greater degree of attention and thereby adds to the general overstimulation to which the film subjects its viewers; especially the Adagio & Fuge in c minor resonates with ominous forebodings and thus evokes the drama that the storyline withholds until the very end.

Le Bonheur might look to some viewers like a melodrama with a somewhat happy ending. But actually, it works—as critics have noted—much like a horror movie. And indeed, Varda’s film bears striking parallels with a classic of this latter genre, Alfred Hitchcock’s Psycho (1960). Jean-Claude Drouot, the TV actor who plays François in Le Bonheur, looks much like a French or Belgian version of Anthony Perkins as Norman Bates. But this is not the only parallel between the two movies.

In Le Bonheur, like in Hitchcock’s classic of five years earlier, one blond woman disappears and is readily replaced by her lookalike. Bates’ taxidermist hobby decks Psycho’s interiors with an abundance of stuffed birds and lards its dialogues with bird-related metaphors. In a similar way, the characters’ obsession with pastoral nature in Le Bonheur turns the movie into a florist’s dream project; and the overabundance of domesticated nature seeps into the dialogues, too. François describes his wife Thérèse as a “hardy plant” while he adores his lover Émilie as an “animal set free.” In Le Bonheur like in Psycho, the interchangeability of the women characters goes hand in hand with the stale representations of nature. In Varda’s film, more so than in Hitchcock’s, this link culminates in a head-on critique of patriarchic objectification of women.

“I am free, content, and you are not the first one. Love me!”

The two female protagonists in Le Bonheur only appear to be interchangeable; in fact, there is a major difference between the two women. Thérèse is submissive, Émilie is emancipated. And while François initially tries to capture both of them with his objectifying speech, Émilie is the first to turn this male logic around. She confronts François with the truth of her own freedom, and with the fact that he himself is only one among many: “Je suis libre, contente, et tu n’est pas le premier.”—“I am free, content, and you are not the first one.” This way, Émilie puts herself in the position to give him instructions: “Aimes moi!”—“Love me!”

Le Bonheur draws very subtle, yet very disturbing, lines that not only divide happiness from hell but also distinguish traditional from modern ideas of happiness. This is a film about radical, disruptive modernization of society, and yet, it only gives subtle clues about the horror and brutality that takes place along the way. While most critics pick up on the impressionist aesthetics in the more rural scenes, many overlook that this is contrasted with more modern, collage-like compositions in the urban settings. It is through her sophisticated visual language that Varda points the direction leading from hell to happiness, and vice versa. If we dismantle clichés, we have good prospects of reaching happiness—if we perpetuate them, we might end up in hell.