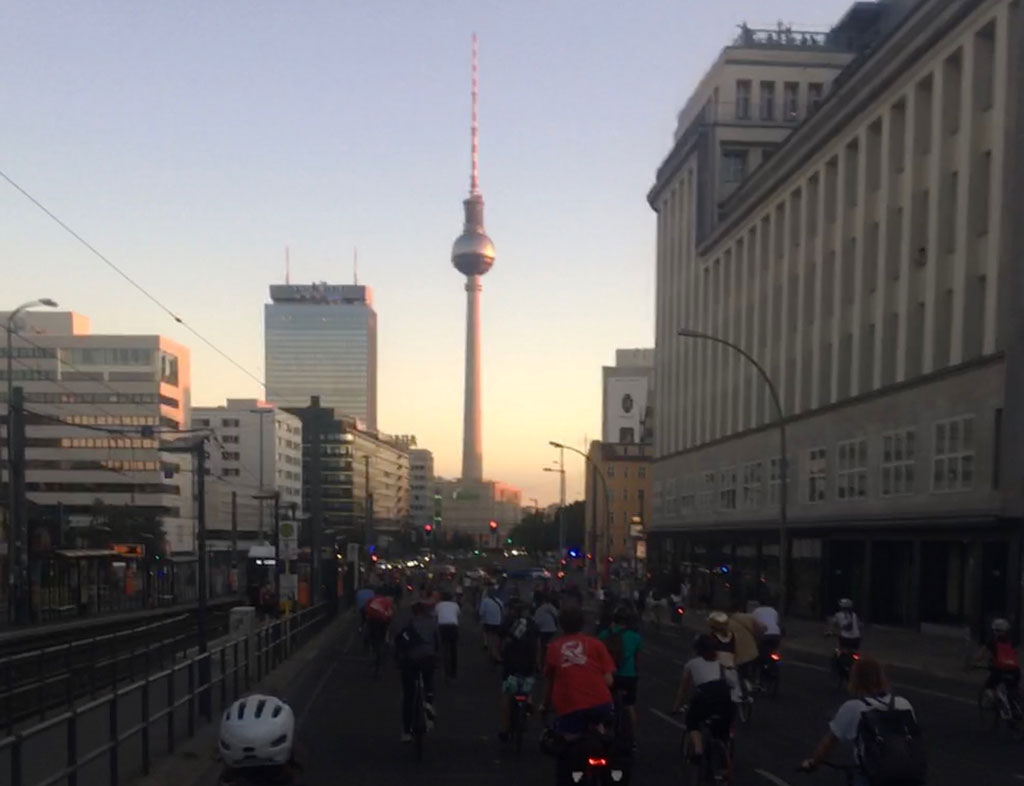 Meeting up with a couple of people for an easy ride through the city—this would be any cyclist’s dream, if only there weren’t so many cars that prefer to have the streets to themselves. This is precisely the reason why there is Critical Mass. The concept originated in San Francisco, where the first bicycle gathering under this name took place on the last Friday in September 1992. Since then, the idea has spread, and bikers in numerous cities across the globe reclaim their streets, which have long been dominated by motorized traffic.

In Berlin, the city where I live, groups of bikers have been coming together with this intent on a regular basis since 1997. They ride at a slow speed and in line with a motto inspired by physics: “safety in numbers,” blocking an entire lane, sometimes a whole street, passing intersections with courage and ease, in formations they call “corking”. The whole thing is organized in a decentralized fashion—a rather spontaneous gathering. That’s one reason why, in accordance with German law, the events don’t have to be registered as public assemblies with the local police.

The most recent Critical Mass in Berlin was particularly well-attended. On the evening of Friday, July 31, hundreds of participants hopped on their bikes. First, they gathered in separate groups at four different locations across the city—to allow for enough space in times of a pandemic. Then, they all rode into the city’s central district Mitte, where they ultimately joined forces for a final “bike up” in Lustgarten, the lawns in front of Berlin Cathedral.

When the bicycle convoys hiss through the streets, they are often watched by families with children who follow the bike-bell whirring bustle with great excitement. It is like a decelerated Tour de France, merch-less and doping-free. The whole flock of bikers is a rather considerate bunch. When there’s an ambulance or fire truck with sirens approaching, the cyclists do not hesitate for a second and make room for an emergency corridor. This shows that people on bikes not only are more agile but also more socially competent than many motorized users of the road.

And yet Critical Mass participants regularly become subject of harassment by police, as seen most recently in the German cities of Nuremberg and Krefeld (North Rhine-Westphalia). In both places, the authorities have pressured participants of the movement to such an extent that they are now worried about the survival of their group actions. In Nuremberg, activists reported in June that police had deflated their tires and thus kept them from continuing their ride—in the absence of any legal base.

Participants of a Critical Mass, in contrast, can avail themselves of the German road traffic regulations. Section 27 (1) of it states: “More than 15 cyclists can form a close formation. As such, they are allowed to ride next to each other in pairs on a roadway.”

Critical Masses take place regularly, usually in the evening of the last Friday of any month, in bigger cities around the world, and in nearly 200 places in Germany alone.

Growing numbers of city dwellers realize the absurdity of traffic infrastructures dominated and regularly clogged by bulky, dangerous, and largely inefficient objects called cars. In times like these, it seems particularly refreshing to see large groups of cyclists reclaiming the streets. The greater the support for such group action, the safer is the vision of an easy ride through the city—true to the principle of critical mass: “safety in numbers.”