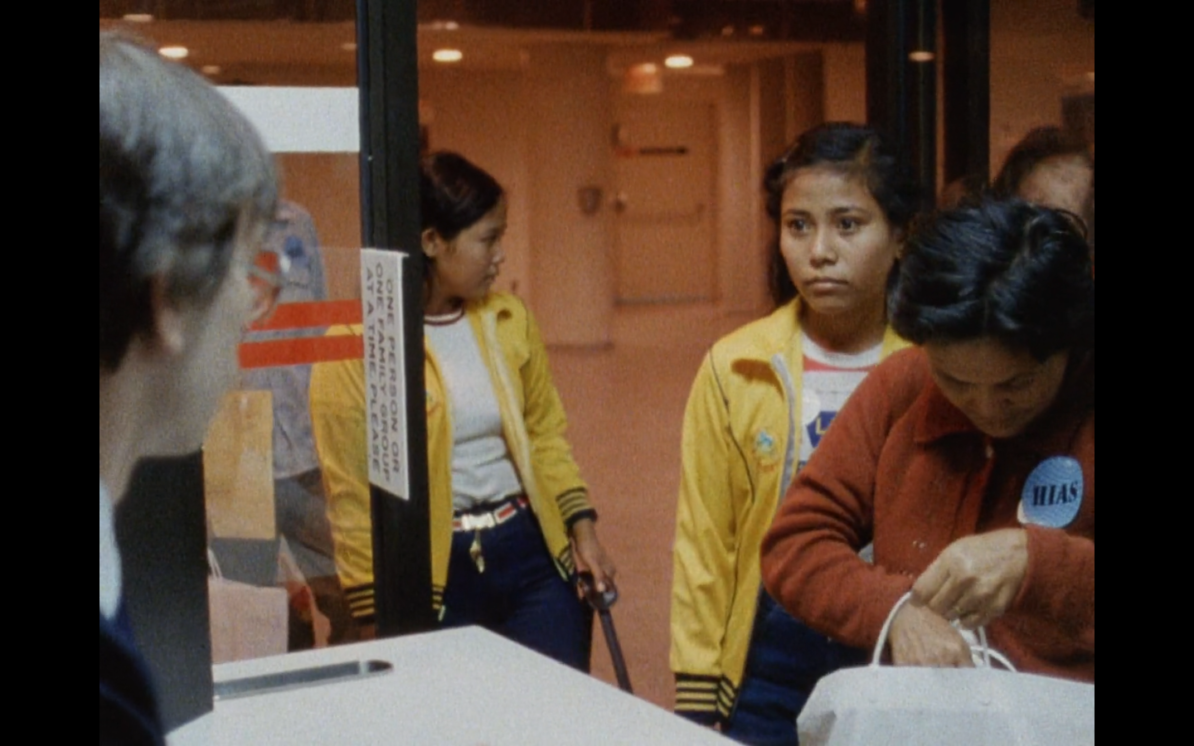 A review of Louis Malle’s 1986 documentary about immigration to the USA—an inspiring work of art which has aged very well.

Many eyes are looking at the United States of America these days with their lids wide-open. Some of them are filled with dismay and horror, some with confusion and bafflement, others with optimism and hope. And in some 100,000 eyes, those emotions may even be present all at once. I write this because today, on June 6, 2020, the US State Department announces the 55,000 lucky winners of the Diversity Visa Lottery. Those who’ve been chosen are now entitled to apply for a green card to live and work in the US. And with their eyes wide open they might be wondering what sort of happiness they can actually hope to pursue in “the land of the free and the home of the brave.”

There is an understandable urge to turn one’s back on a nation that keeps reproducing age-old injustices, that is sinking ever-deeper into a crisis of democratic legitimacy, and that has elected leaders who ignore the fact that domestic problems are global problems or vice versa. I for my part am trying to resist that urge. Instead, I have turned to the nation’s other, more humanistic, open, and empathetic sides so as to find hopes for a different future. The Criterion Channel, the streaming outlet of the Criterion Collection, has recently helped me on this quest. While the US leadership and authorities have been shocking the world with fits of racism, bigotry, and isolationism, the film channel features not only the rich diversity of international cinema, but also a series of films by women directors, another one about pioneers of African American cinema, the marvelous documentary “The Times of Harvey Milk” along with some 15 related interviews, and a retrospective of the work of a certain French-born filmmaker gone Hollywood named Louis Malle.

Criterion is a promised land for cinematic treasure hunters like me. And one of my most recent discoveries is a fine documentary by Louis Malle that runs under the auspicious title “…And the Pursuit of Happiness.” I know Malle’s take on the ‘American Dream’ from masterpieces such as “Pretty Baby,” “Atlantic City,” or “Dinner with Andre.” As I remember them, these films are holding up a mirror to the face of America, showing both its shiny and its gloomy sides. I’ve never seen Malle’s “Alamo Bay” (1985), so I can’t tell if a scathing review of it in the New York Times is accurate, or just the result of an immune reaction to a film that zeros in on two glaring blots on the American self-image: the KKK and the Vietnam War.

Malle’s pictures are sometimes pleasing to the eye but never do they show a sign of complaisance.

Judging from the films by Malle that I have seen, his pictures are sometimes pleasing to the eye but never do they show a sign of complaisance. In line with this, “…And the Pursuit of Happiness” has the unembellished look of a classic documentary, but with an eye for the inner beauty of humankind. The film is told with a seemingly naïve, almost innocent voice and with a carefree cadence. Malle appears to stumble from one individual American dream into another. He comments on his jumpy journey across the US with a voice-over spoken with his own French accent and the crew that accompanies him repeatedly has the microphone drop into the frame. However, the film’s innocent feel is deceptive.

The camera cuts sharp from the huts of undocumented immigrants at the Mexican border and straight into the lush Miami living room of former General José R. Somoza, the illegitimate son of the former Nicaraguan dictator Anastasio Somoza García. Such cuts communicate quite clearly that the very same country that grants asylum to some perpetrators of injustice often denies it to the victims.

A Cambodian family who has survived the terror of the Khmer Rouge is welcomed by a jovial customs officer.

In other scenes, the US is shown from its rather benevolent side. A Cambodian family who has survived the terror of the Khmer Rouge is welcomed by a jovial customs officer who lets them enter the country with a bucket full of rice. The camera captures the anxious looks in their eyes that speak volumes, lending to Malle’s film a profoundly human brilliance.

An immigrant to the US himself, Malle uses his film to show his new homeland through the anxious eyes of other immigrants:

A volunteer at a “million-dollar” mosque in Richardson, Texas, who used to be a schoolteacher in Pakistan confesses that she now earns a living as a beautician. She explains this exceptional change of careers with a cheeky smile: “America is so beautiful, it attracted me into that life.”

The Saint Lucian poet and playwright Derek Walcott confides to the viewers his ambivalent view of American life. On the one hand, he says, US society is much more revolutionary and evolutionary than communism, since “the process of becoming American is continuous.” On the other hand, he describes the US as “a dictatorship of mediocrity, of poor taste,” an “aggressive democracy” that forces everyone to “be equal!” And a good life in this country, Walcott suggests, can only be lead as a continuous fight against this equalizing force.

To be sure, Malle’s documentary shows anything but equalized mediocrity. The director’s own fascination with the US, as we get to see it in his film, might have been exactly this: A mosaic of different views and lives, superimposing the new with the familiar, the customs of the world with the promise of a shared future. The film grants a highly self-aware view of the USA, conscious that the country depends on its immigrants not just as an always renewable stream of human resources, but also as sensory organs that help the nation look beyond its own nose.

…And the Pursuit of Happiness, Directed by Louis Malle, United States 1986, 80 min.

The film was first shown in 1986 as a television documentary on the HBO network, as part of the series “America Undercover.” It appeared at a time when immigrants from Latin America and Asia for the first time outnumbered those coming from Europe (Pew Research Center). This and the high numbers of undocumented immigrants at the time sparked debates and provoked calls for a general immigration reform, which impelled President Reagan to grant amnesty to over 3 million undocumented immigrants by signing the Simpson-Mazzoli Act later in 1986. In the same year, the US started establishing temporary visa programs with the intent to ‘diversify’ the influx of immigration as to the countries of origin (Politico Magazine).